Methane leaks from aging gas distribution pipes are a major source of greenhouse gas emissions in Massachusetts. In Boston, methane leaks are the largest driver of climate change in the city’s footprint – more than all vehicle emissions. The 2014 law, An Act Relative to Natural Gas Leaks, which BCAN helped to pass, took a first step in addressing this problem by establishing a system to grade leaks on safety, requiring utilities to repair the most dangerous gas leaks, and mandating their reporting of the locations of known gas leaks. However, the remaining leaks continue to be a major contributor to climate change, posing challenges to the Commonwealth’s ability to meet emissions reduction targets. 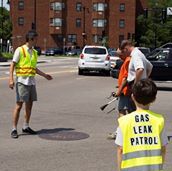 The Gas Leaks Campaign was an enormous success: on December 14, 2016, the Boston City Council passed a Gas Leaks Ordinance to speed up gas leak repairs, better coordinate infrastructure repairs, and increase safety for workers and residents. This new ordinance was the result of a multi-year, multi-organization campaign and thousands of hours of work by BCAN volunteers, and will:

We are Boston residents taking personal, social and political action to achieve climate justice, from identifying dangerous gas leaks to implementing the city’s Climate Action Plan. We join with other grassroots organizations in Boston and across Massachusetts to educate and mobilize others.

Stay up-to-date with all of BCAN's efforts to fight climate change in Boston.